Control hive: formic treated as per Provincial standards for chem hives Miteaway  strips serve as our chemical choice for this work. At cool temperatures Miteaway is an effective product.

There remain questions of dosage, timing and frequency in this work with Ss
These questions are currently undergoing structured investigation. Peer review and fellow beekeeper observations are welcome.

Significant observations:
Varroa population appeared to be under control throughout the season. Honey harvest was strongest in July. This was the first year for two harvests of honey.

Temperatures were cool throughout the summer with three notable +30 C days in Sept, These 30 degree days in Sept drove varroa populations above the detection level limits, calling for the fall inoculation of  200 ml Ss.

From the graph below you can see as the predation and the generation of shells climbed to peak in late August.  This triggered an exodus of varroa from the hive. 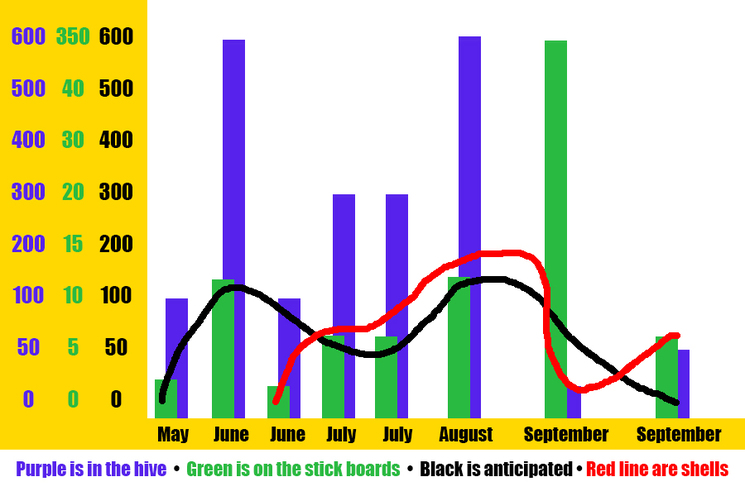 Our speculation is the harassment of the varroa is as serious as black flies on a camping trip. The bees appear to be better at knocking varroa off when they are being harassed by the Ss. At any rate something good is happening for the bees and maybe not so good for the varroa.

Varroa shells were monitored throughout the term When eaten by Ss the varroa leaves behind the hard outer shell. We counted shells as compared to live varroa on the sticky boards. Shells appear approximately 10 days after the introduction of Ss. The highest concentrations of shells compared to  live varroa was noted just before the exodus of the +300.

Upon microscopic investigation very little evidence of predation was noted on the varroa in the 300 drop  Five days later only 6 varroa and 11 shells were counted.

A speculation is the feeding of the Ss is a perpetual problem for the varroa. Ss population overwhelm or lag on varroa natural population expansions. The Ss overwhelm at inoculation time  Ss breed in the hive as noted clearly in our investigations last year. Ss are breeding up to the level of food and varroa is the food.. .

Varroa appear to breed and travel at an amazing speed.  Setting colonies of Ss at maximum populations when varroa are most vulnerable is information we hope to collect in the years ahead.
So far our preliminary look at this bio technology is very promising. The varroa behave similarly in chemically treated hives and rebound quickly. Understanding dosage, frequency and timing will help us to zero in on an effective predation to the number one enemy of honey bees today.

We highly recommend other beekeepers test Ss and communicate with us.We anticipate small hive beetle information late in this year from a US beekeeper replicating our trials with Ss..